You have probably heard they removed the statue of Joe Paterno at Penn State and put it in “a safe place” somewhere: 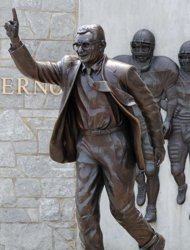 I must confess I have been of two minds on this issue for some time. I recently wrote in a blog that the statue should not be removed because its removal would be a falsification of events: it is a rewriting of history. Like it or not, Joe Paterno spent the best part of his life at Penn State and had a tremendous impact on countless lives –both positive and, as we now know, negative. His football teams were a model for the rest of the country, or so it seemed. But in light of recent events and the pivotal role Paterno played in the fourteen-year cover up of his assistant coach’s attacks on young boys, I now think the President of the University is making the correct decision.

I was persuaded by an outstanding editorial in a recent issue (July 23, 2012) of Sports Illustrated that reminded me of something I said in print a number of years ago: the purpose of a university is not to promote football (or sports in general) it is to educate young people. As I said in an article in The Montana Professor: The tail wags the dog at the Division I level. Sports play a disproportionately large role in the university in our day. Perhaps this was a wake-up call to restore instruction to its proper place at the center of the university. In the case of Penn State and its football program, the editors of Sports Illustrated put it very well:

Why not instead [of cancelling the football program] have Penn Staters create the program they always claimed to have? Football is supposed to enhance the academic experience at Penn State as part of Paterno’s Grand Experiment. The school can stop selling the idea and implement it. Use football for a more concrete cause: Profits from the coming season could be diverted to create a facility to study and destigmatize child sex abuse.

I had suggested in my earlier blog a monument to the children who suffered at the hands of Jerry Sandusky, but this is an even better idea: a living reminder of the atrocities that man committed on that campus in memory of the young boys who were the victims. And a program such as the one mentioned here could do immeasurable good in the face of the many terrible events that occurred repeatedly in the last fourteen years on that campus.

Football should never have been allowed to take the place of honor it took at Penn State. No coach should have been allowed to have the power and influence that Joe Paterno had in State College. But as horrendous as this scandal was, we all know this is just the tip of the iceberg. So much money is involved in NCAA Division I football that corruption is rampant on college campuses all across the country as football is given pride of place and education is forced to take a back seat. Let me give you a tiny example of the kind of disproportionate place football has on a college campus, in this case a small university campus involving a small football program with little or no money at stake.

When I was named men’s tennis coach at the University of Rhode Island many years ago I was approached within days by an assistant football coach who informed me that they would be sending their players to my classes from then on so I could “take care of them.” I didn’t know what to say, so I just stared dumbly and smiled. These memories percolated recently when I read the comments made by the janitors who witnessed Sandusky sodomizing a young boy and were afraid to speak up for fear of losing their jobs. In my case, the issue died, fortunately, as I left the university soon thereafter. But I felt the kind of pressure any young person would feel in a large institution when his job is in jeopardy. One can imagine how the faculty feel at a large university where the football coach is king and members of his team are the privileged few. The tail does indeed wag the dog.

It makes sense to remove the statue of Joe Paterno from the Penn State Campus. But  it also makes sense not to deify the football coach on other campuses across the country and not to allow the football program to be the focus of what is going on at that university. We have not heard the last about the scandal at Penn State. As I write this the NCAA is preparing to levy strict penalties against this particular university, to make an example of it as it were. But there are potential scandals aplenty “out there” on other campuses and levying penalties and removing statues — while entirely appropriate — are hardly more than small steps toward restoring the proper order of things at our universities.

8 thoughts on “The Statue”