This country was founded on the principle that a standing army should never be necessary; under the Second Amendment a militia made up of ordinary citizens would be guaranteed the right to bear arms to protect their country from tyranny. Even after the First World War we had no standing army, though in 1911 the concept of a militia was laid to rest. After the War to End All Wars, the country’s military might continued slowly to grow, and in the 1930s our government had a standing committee in Congress to oversee the military; in 1934 Congress passed the National Firearms act designed to keep the production of weapons of war in the hands of the government — and such weapons as machine guns out of the hands of civilians. In 1939 the Supreme Court upheld the Firearms Act insisting it was entirely consistent with the Second Amendment.

But even keeping them out of the hands of the citizens didn’t keep the production of weapons of war from making some people in this country very wealthy, despite the fact that in 1934 the Senate Munitions Committee was headed by a Republican, Gerald Nye of North Dakota, who famously said “The removal of the element of profit from war would materially remove the danger of more war.” Not long after they were uttered, these prophetic words were soon drowned out by the sound of bombs dropping on Pearl Harbor. By the end of the Second World War a standing army was a matter of course. And with the Cold War ongoing the power of the military grew — as did the wealth of those companies providing the military with weapons and armament, resulting in President Eisenhower’s famous warning against the “military-industrial complex.” That warning has also been drowned out, this time by the sound of the cash registers ringing up huge profits for munitions companies like Lockheed Martin, a firm whose contracts with the Pentagon amount to some thirty billion dollars annually. This company alone spends fifteen million dollars a year to persuade members of Congress that we need a strong military presence in all parts of the world and that the military needs the very latest in weapons. No conflict of interest here! 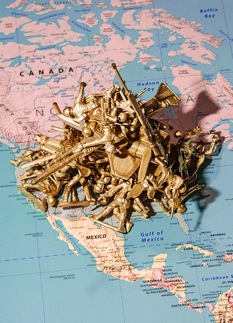 Photo from The New Yorker

It is well known that members of Congress, on both sides of the aisle, are beholden to the “military-industrial complex,” that entity that has morphed into a hydra-headed monster now in control of Washington. Lockheed Martin has contributed to the election of three hundred and eighty-six of the four hundred and thirty-five members of this Congress. In the distance you can hear (if you listen very carefully) the fading words of President Eisenhower:

“Every gun that is made, every warship launched, every rocket fired signifies in the final sense a theft from those who are hungry and are not fed, who are cold and are not clothed. This is a world in arms. This world in arms is not spending money alone; it is spending the sweat of its laborers, the genius of its scientists, the hopes of its children. . . This is not a way of life in any true sense.”

Jill Lapore, the author of a most interesting article in the January 28th issue of The New Yorker tells us that “The United States which was founded on opposition to a standing army is now a nation engaged in a standing war.” This, of course, is the so-called “war on terror,” which is not a war at all. She quotes Colonel Andrew J. Bacevich, a West Point graduate who fought in Viet Nam in 1970 and 1971, who warns us that we “have fallen prey to militarism, manifesting itself in a romanticized view of soldiers, a tendency to see military power as the truest measure of national greatness, and outsized expectations regarding the efficacy of force.” Bacevich is now a professor of history at Boston University and he had some profound remarks to make about the war in Afghanistan, which he likens to the War in Viet Nam. “The mystical war against Communism,” he says, “finds its counterpart in the mystical war on terrorism.. . .[mysticism] prevents us from seeing things as they are.” This from a man who knows whereof he speaks. And it should make us ponder the real costs of what is euphemistically called “defense.”

9 thoughts on “The Cost of Defense”