Miguel Cervantes was born in a small town near Madrid, Spain in 1547 and was, among other things, a soldier. He served with great valor and was shot in the chest and arm, leaving his left arm practically useless. He later spent five years as a captive in an Algerian prison where he pondered life and its many meanings. And, oh yes, he wrote Don Quixote which garnered him fame but little financial reward. The book was so popular that a bogus sequel was written by another author and Cervantes wrote the second part of his classic in order to make sure Quixote was dead in the end and another sequel would never appear!

As a result of Cervantes having been shot he seems to have longed for the day when men fought one another face-to-face — like knights-errant. Surely, this was at least part of the inspiration for his great novel. But another part of his inspiration was the coming of not only mechanized warfare, which he detested, but also the coming of machines, which he saw as impediments to the growth of the human spirit. Hence Quixote’s famous battle with the windmills.

Don Quixote was generally regarded as a madman. He saw things differently from other people and he was therefore dismissed as mad. It’s what we do. I prefer to think of him as a poet, since poets also see things differently from the rest of us and many times make us look again and see things we had missed before. Quixote does that again and again — especially alongside his practical, down-to-earth sidekick Sancho Panza who is like the rest of us and prefers to see things as they “really are.” But one of the things Cervantes’ novel demands is that we ask  just what on earth reality is. What is real?

When Quixote sees a barber plodding along on his donkey in the distance with his basin comfortably perched on his head it is clear, to Quixote, that the barber is a knight and he is wearing the helmet of Mambrino, the famous knight whom Quixote immediately decides to engage in battle. The barber sees Quixote coming at him at full gallop (well, as full a gallop as poor old Rocinante will allow) and flees in terror, leaving the basin behind. (Sorry, leaving the helmet behind him: the spoils of war, don’t you see?) 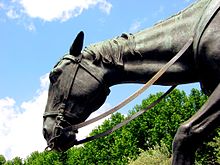 Sancho, of course, insists that the helmet is really a basin and this gives rise to one of the more colorful and provocative discussions between the two men in the entire novel. It goes on for many pages and is a delight to read. Is the item a basin or is it a helmet? After considerable discussion, Quixote finally addresses Sancho as follows:

“Do you know that I think, Sancho? I think that this famous piece of that enchanted helmet must by some strange accident have fallen into the hands of someone who did not know its worth and who, seeing that it was of the purest gold and not realizing what he was doing, must have melted down the other half for what he could get for it, while from the remaining portion he fashioned what appears, as you have said, to be a barber’s basin. Be that as it may: I recognize its value and the transformation that it has undergone makes no difference to me. . .”

And as Quixote later notes,

“. . .there are always a lot of enchanters going about among us, changing things and giving them a deceitful appearance, directing them as suits their fancy, depending upon whether they wish to favor or destroy us. So, this that appears to you as a barber’s basin is for me Mambrino’s helmet. . . .”

Quixote is not mad: he knows things look different to other people. But for poets things are not as they seem. It is for us to let discursive reason and logic take a hike every now and again and engage our imaginations so we can see the world in the many colors and shades of meaning that we tend to gloss over in the hurly-burly of everyday life. The poets and artists in our world take us for a ride if, and only if, we are able to suspend our sense of what is real for a moment and in the process we learn to see things anew and engage the world more fully. The item in Quixote’s possession is both a basin and a helmet. After all, the Don puts it on his head and it saves him later on from a barrage of stones thrown by an angry shepherd whose sheep Quixote “mistakes” for an army.

8 thoughts on “Quixote As Poet”