In the Wikipedia discussion of nuclear weapons, we are told that “A thermonuclear weapon weighing little more than 2,400 pounds (1,100 kg) can produce an explosive force comparable to the detonation of more than 1.2 million tons (1.1 million tonnes) of TNT. Thus, even a small nuclear device no larger than traditional bombs can devastate an entire city by blast, fire, and radiation.” We are also told that there are approximately 17,000 nuclear weapons worldwide.

While you surely know about the concerns world-wide over the leak of nuclear waste from the damaged nuclear plant in Fukushima, Japan not long ago, you may not have read about the revelation that a near-calamity was avoided when, some years back, a plane carrying two nuclear bombs had engine trouble and had to release its bombs in North Carolina where they fell harmlessly to the ground. Apparently there are three “triggers” that must be tripped before the bomb will ignite but they discovered that two of the three triggers in one of the bombs had tripped leaving only the third one as a last-ditch safety measure against certain calamity. As the Guardian recently reported:

A secret document, published in declassified form for the first time by the Guardian today, reveals that the US Air Force came dramatically close to detonating an atom bomb over North Carolina that would have been 260 times more powerful than the device that devastated Hiroshima.

The document, obtained by the investigative journalist Eric Schlosser under the Freedom of Information Act, gives the first conclusive evidence that the US was narrowly spared a disaster of monumental proportions when two Mark 39 hydrogen bombs were accidentally dropped over Goldsboro, North Carolina on 23 January 1961. The bombs fell to earth after a B-52 bomber broke up in mid-air, and one of the devices behaved precisely as a nuclear weapon was designed to behave in warfare: its parachute opened, its trigger mechanisms engaged, and only one low-voltage switch prevented untold carnage.

Each bomb carried a payload of 4 megatons – the equivalent of 4 million tons of TNT explosive. Had the device detonated, lethal fallout could have been deposited over Washington, Baltimore, Philadelphia and as far north as New York city – putting millions of lives at risk. 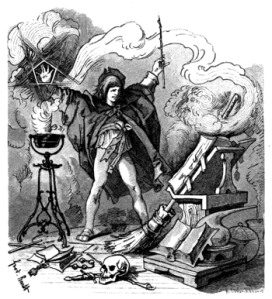 Goethe’s version of The Sorcerer’s Apprentice

You may also have read Mary Shelly’s Frankenstein that focuses attention on the determination of one man to create another in his image: Jacques Ellul called it the “technological imperative.” If we can do it we should do it.” This is the reverse of David Hume’s formula for ethical action: “ought implies can.”  If a person cannot do something we cannot say he or she should have done it — save a child’s life if they cannot swim, for example. The technological imperative reverses this formula and tells us that “can implies ought.” If we can do it, we should do it. Ethical questions are simply not raised. Thus is born the determination to create another human being, as Shelly suggests. The genie comes out of the bottle, the sorcerer’s apprentice messes with things he doesn’t fully understand and creates a broom to do his work that goes completely out of control. Things are in the saddle and ride mankind. In a word, we have gone so far down the path toward control of nature and the determination to demonstrate our own technical ingenuity that we are now unable to put the genie back into the bottle. We are very good at asking the question “how?” but we completely ignore the basic question, “why?”

I have always wondered if the story in the Bible about the Garden of Eden was a parable for our times. The earth as we have come to know it is the Garden in all its glory. But we have eaten of the apple of knowledge (technical knowledge) and are about to destroy the beauty around us and ourselves in the process. We will not only be cast out of the Garden of Eden, we will annihilate ourselves in the process. It’s a sobering thought and one that is hard to dodge when we read about nuclear accidents and near-misses like the case of the nuclear weapon that nearly went off in North Carolina not long ago and which would have caused untold human and animal life. And to what end, we might ask? But that is a question that is never asked by the technical experts. They only ask: can we do it?

5 thoughts on “Playing With Fire”