Jean-Jacques Rousseau was no friend of representative government. He was convinced that citizens are only politically free when they make the laws they themselves obey, in a pure democracy. Indeed, he was convinced that in a pure democracy the citizens would be well-informed and discuss the issues thoroughly. They would then vote and their decision would be the correct one. Anyone who was in the minority would then obey the will of the majority and in doing so, paradoxically, be “forced to be free.” Freedom, in Rousseau’s view, is defined as doing the right thing. Any form of representation, on the other hand, is a form of slavery, according to Rousseau. Citizens are putatively free for one brief moment when they vote, but after that moment has passed, they are slaves to the people they voted into office — those who would subsequently make the laws the voters would then have to obey. 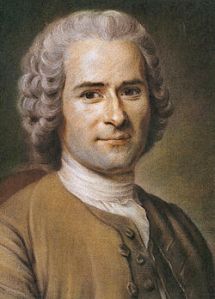 Rousseau, of course, never envisioned an age in which the airwaves would be filled with political campaigning, promises never to be fulfilled, and smiles that never seemed to leave the faces of the politicians who spent fortunes to be elected — not to mention the endless stream of phone calls and emails promoting the latest candidate who will assuredly  “cut the pork” and “break the grid-lock in Washington.” He also never envisioned an age in which the candidates themselves would be chosen by a handful of wealthy men running giant corporations, thereby limiting the “freedom” of the voters even more. After all, how free are we when we don’t even chose the folks we are supposed to vote into office? But, then representation is itself a logical puzzle. Think about it.

One person cannot possibly represent more than one other person — with whom he presumably agrees on every possible point of contention. Two or three, or two or three thousand people who are supposed to be “represented” by a single person, a paid politician, is a logical impossibility. And when that politician’s allegiance is to the wealthy few who have placed them on the ballot in the first place, then the notion of political freedom in a representative government begins to stretch beyond recognition.

In a word, Rousseau’s notion that voters are free only when they actually vote (presuming that they bother to vote at all) raises problems in the world we have come to know — the world in which politicians are professional liars, for the most part, who are selected by a process over which we  have no real control. We seem to have even less political freedom than Rousseau imagined, which was very little indeed. But why worry? I’ve got over two hundred channels on my television: now there’s real freedom!

2 thoughts on “Free Or Slaves?”