In an interesting article about the original 20 items on James Madison’s Bill of Rights — reduced to 12 after considerable debate in the Continental Congress and later to 10 during the ratification process —  it is made fairly clear what the man was thinking when he wrote those amendments.

We know that the major concern of those who were debating the Constitution was the issue of ratification. How to write the Constitution in such a way that the required number of states would agree to it? Originally it mentioned the abolition of slavery, but that had to be cut to assure that the Southern states would climb on board. A number of those items also had to be cut from Madison’s 20 “Rights,” though they were eventually reworked into later amendments — such things, for example, as restricting Federal judicial powers. Another was added as late as 1992. Compromise was necessary in a new nation where individual rights, and the rights of the states themselves, must be guaranteed. The original Second Amendment reads as follows: 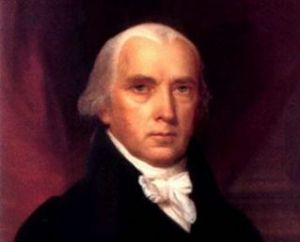 “The right of the people to keep and bear arms shall not be infringed; a well armed and well regulated militia being the best security of a free country: but no person religiously scrupulous of bearing arms shall be compelled to render military service in person,” said Madison.

The final clause was dropped, sad to say. But, like that clause, the remaining part of the statement makes it abundantly clear that the major concern in this amendment is the right of the militia to bear arms, since the right of “the people” is predicated on the claim that “a well armed and well regulated militia” is necessary to guarantee that the country remain free. And the reference to “military service” in the omitted clause also makes it clear that the militia was of major concern — for reasons of self-defense.

It is a wonder in these days of heated debate over the need for some sort of gun control to limit the sales of automatic weapons to possible terrorists in this country that few bother to recall what the founders were most concerned about when they agreed to the Second Amendment. Much is said about our “Constitutional Right” to bear arms, but nothing whatever is said about this so-called right being predicated on the maintenance of a militia. With the disappearance of the militia the right to bear arms also disappears. At best, one could argue that the National Guard has such a right. But not every Tom, Dick, and Sally — and certainly not those who are not of sound mind.

Note: After writing this post I was pleased to read an article quoting various Constitutional lawyers on this topic that support what I have said here:

For almost 200 years after it was adopted, the Second Amendment was interpreted to protect the right for militias to bear arms, but not individuals. In 1939, the Supreme Court ruled in United States v. Miller that restricting access to shotguns or machine guns by citizens outside the military was permissible. . .  .

[Harvard Law Professor Laurence Tribe added that] the Second Amendment does not stand in the way of gun legislation to make the country safer.

“The largest misconception is that the Second Amendment justifies — or ever has justified — our nation’s abysmal record in protecting innocent people from avoidable gun violence, . . . The Second Amendment and the Constitution as a whole are abused by those who treat them as a sick suicide pact.”

So while there is a legitimate political debate to be had about the merits of gun control, Tribe says, conservatives are wrong to make it a constitutional issue.

This, of course, does not imply that the debate over gun control will end, though it should quiet those who argue that carrying automatic weapons is a “right” guaranteed by the Second Amendment. However, it most assuredly will not.

One thought on “Madison’s Amendment”