I repost once again because I have begun to think that some of my best thoughts have already been set forth and there are a few new readers who might find them worth pondering.

There must be many school administrators who have too much time on their hands. They keep trying to come up with new ways to teach and learn forgetting that the best way to do that is to get the brightest teachers you can by paying them a decent salary and then turning them loose in the classrooms. Instead, they have fallen hook, line, and sinker for the electronic toys that have been incorporated into schools at nearly every level. This is part of the common educational practice of bringing the subject matter down to the level of the student rather than to have the student stretch and grow to reach a higher level. “Dumbing down the curriculum,” as it is called. Give ’em what they want. The kids play with electronic toys, let’s incorporate them into the curriculum. Somehow. The latest educational fad in “higher” education is to make learning even easier and less painful: let the students stay at home where they can sit in front of a computer screen as passive vessels instead of in a classroom where they might accidentally interact with each other or, worse yet, the instructor. 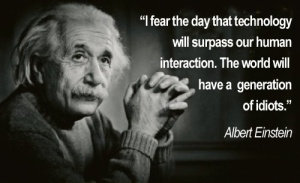 I’m with Albert here: led by a purblind educational bureaucracy we are rapidly turning out idiots who cannot interact with one another and cannot use their minds except to turn things on and off. Socrates was never “certified” to teach, and he didn’t use the latest electronic gadget, either. Plato’s Academy also did rather well without the latest electronic toy, thank you very much. After all, Plato was able to turn out people like Aristotle without a huge cadre of administrators looking over his shoulder, a committee of well-meaning board members to answer to, or a single computer.

Our addiction to electronic toys has seriously inhibited human interaction as we see people walking down the street holding electronic devices to their ears or looking down at the device they are sending text messages from: they don’t talk to one another any more, they talk at one another — in broken English. As suggested above, the latest fad in higher education is the trend toward on-line learning, which is simply another way to guarantee that students will learn very little. I dare say it will soon catch on at the high school level as well.

However, studies have shown repeatedly that the lecture method — in the classroom or on-line — is the worst way to teach a subject for most students. In addition, the drop-out rates in on-line education are off the charts. Real learning takes place when people interact with one another. On-line lecturing is simply multiplying the lecture-system mistake by making it easier and faster — and cheaper. And there’s the rub. Education has become so costly that students are turning to on-line “universities” like The University of Phoenix, and the other colleges and universities realize they must either join the party or sit by as their high-paid faculty lecture to empty halls. It’s sink or swim. We are now told that a group of so-called “prestige” universities wants to join the fray:

Now 30 Under 30 alum 2U, which has previously focused on online graduate degree programs, has decided to throw its hat into the ring. This week, the company, formerly known as 2tor, announced a partnership with a consortium of 10 universities to offer undergraduate courses online. The company’s new program, Semester Online, will launch in September 2013 with a catalog of about 30 courses offered by Brandeis, Duke, Emory, Northwestern, University of North Carolina, Notre Dame, University of Rochester, Vanderbilt, Wake Forest, and Washington University in St. Louis.

Whatever the reason, we insist on embracing the latest fashion even when the evidence proves that it not only fails to deliver the goods, but it actually inhibits the results — teaching and learning in this case. Electronic gadgets do not enhance learning; as Jane Healy has shown, they actually inhibit learning. Their use has led to the incapacity of parts of the brain to function as they should, thereby making thought and coherent speech more and more difficult for growing numbers of young people. Instead of embracing the latest fad, we might be better advised to simply reflect on the goal of education which is to enable young minds to grow and develop. We need to stop worrying about what is latest, or cheapest and easiest, and start to recall what is most effective: a good teacher in a room interacting with interested and curious students. Preferably they should sit in a circle or, better yet, around a table.